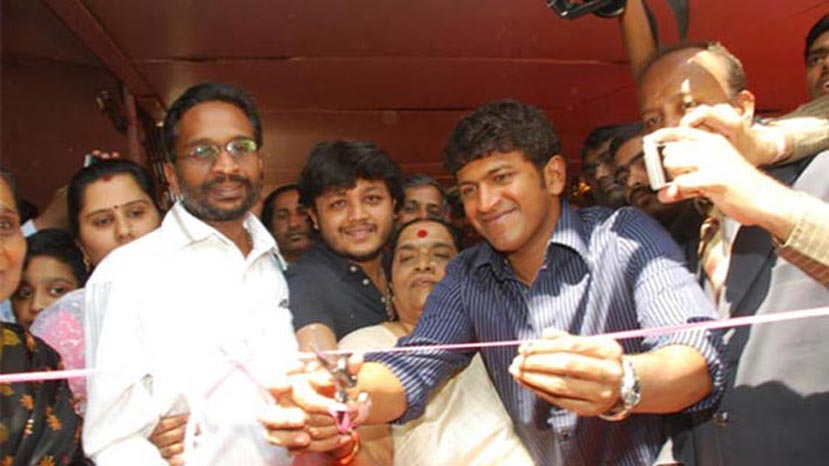 Power Star Puneet Raj Kumar and Golden Star Ganesh were excited after looking at 3000 stills of the Golden era of Kannada cinema which presented a variety of films for the film audience. Both these young stars inaugurated on Monday the photo exhibiton organised by K.M.Veeresh, Editor, Chitraloka.com, the most popular website dedicated to Kannada films, at Gayathri Vihar, the venue of the Platinum Jubilee celebrations.

Puneet and Ganesh along with Ms. Parvathamma Raj Kumar were looking closer at some of the stills of films made during the forties and fifties. Puneet exclaimed Wow after looking at the still of Bedara Kannappa. There were some of the film stills of Dr. Raj Kumar which were not seen by him earlier and he looked at them closely and watched the expressions of his father in those stills.

Ganesh was quite happy and excited after a full view of the three thousand odd stills on exhibition. "We are in the year 2009, but I am still doubtful whether we retain the same passion shown by film makers some fifty, sixty years ago. And look at the quality of actors at that time.

There were little technical support at that time. But the actors managed to give some fantastic expressions to convey the emotions and mood of that particular sequence' said Ganesh. Puneet was equally happy to see many stills of his father's films and some other films which had some really big names of the Kannada film industry.

Mrs. Parvathamma Raj Kumar remembered olden days when her husband late Dr. Raj Kumar had worked while looking at some of the stills. She was also happy that Veeresh was able to get those stills and put in for exhibition. "It is a nostalgic trip of my memory lane. It reminds me of many incidents that happen in those days and also the extent of hard work that my husband had put in to portray such roles' said Parvathamma.