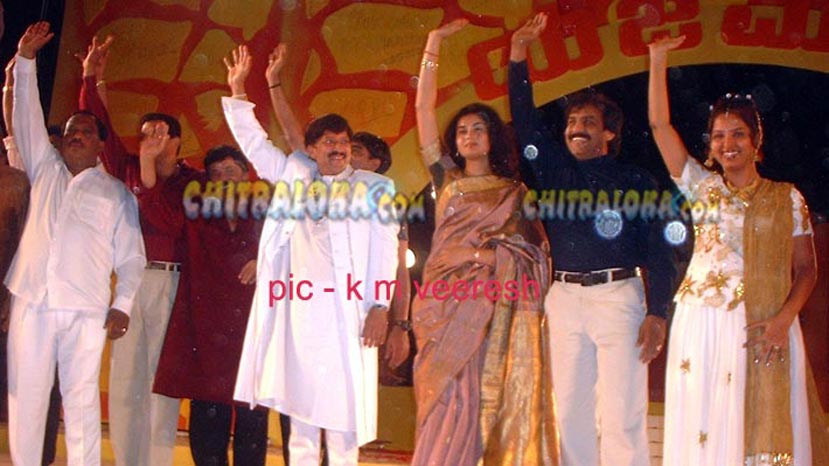 The 175 days ‘Yajamana’ function besides massively attended by Vishnuvardhan fans was excellent once again because of a spectacular backdrop and sharing of heartfelt moments by superstar Vishnuvardhan and rebel star turned Member of Parliament Ambarish.

Such a gala function was not free from lacunas. The journalists and music director cum lyricist the humble looking Kalyan and his family members were pushed aside several times at the only VVIP entrance by the Police. Kalyan not able to control any more contacted the event manager of the function Mr Madhu Bangarappa. By the time the way was made for Kalyan, the journalists had the taste of heavy boots of policemen and the lathis were flying high. Soon another entrance was made available. The producer of the ‘Yajamana’ Rehman also expressed his inability and told that he was also pushed aside by the policemen. What you would do at such a circumstance? There was no way yet but it was inevitable to stay. The returning to the respective houses would have resulted in a great miss.

However the silver jubilee function went off as expected with fans outnumbering the organizers on the stage. It was an attractively erected stage. The stone build like entrance was decked with the late director Seshadri’s huge picture in the center. At the right side was senior Vishnu’s get up photo of the film ‘Yajamana’. In the left side was the key artistes photograph. On both the sides there were huge screen to beam the clippings.

Here is a quick look at what went on:

Producer Rehman – For this massive hit the people of Karnataka are responsible.

Former Minister H.Ekantaiah – For a good citizen coming up this type of films helps.

K.C.N.Chandrasekhar President of Film Chamber – This day has to be written in gold letters. The Kannada audience once again showed that they receive anything made good. Today holds a mirror to the image of Vishnuvardhan. He is disciplinarian cool and collected possess high degree of acting skill and also a sacrificing human being. The fans arrived here itself shows his strength. I don’t know what to say for ‘swamake’ and ‘remake’.

Ambarish – He lost his cool at his short speech when fans interrupted. You people call Vishnu as ‘Yajamana’ today but I have been calling him with such respect since ages. Again and again asking the fans to keep silence and hear to his speech made everyone to wait in patience. As everyone was expected a big statement from rebel star he got himself tucked with the late director Seshadri. The destiny would not leave anyone. Not you, I, Vishnu and Atal Behari Vajpayee remarked Ambarish.

VISHNUVARDHAN – The vivacious Vishnuvardhan looking perfectly fit for another 100 films in his career was in pure white costume with navarathna mala around his neck. He directed addressed his fans as his ‘Hasiru and Usire’. For the success of ‘Yajamana’ you (waving at the crowd) are responsible he said. There are two Yajamanas according to Vishnuvardhan. One is not seen that is God and the other one seen is that of the audience. The whistle and claps for a few minutes went on.

A perfect speech to the perfect function came from Vishnuvardhan. He expanded the four letters ‘Yajamana’ in Kannada and thrilled everyone. Even after seven more births I will not be in a position to fulfill your aspiration.

Referring to his brother in law Seshadri who is no more Vishnu dedicated the success to Seshadri. Seshadri my Seshu had lots of dreams to make it true but destiny played a cruel role said Vishnu in a choked voice. Let Seshadri be anywhere in this world he has to live happily felt the marvelous actor of Kannada cinema Vishnuvardhan.

In his last but least address Vishnu opined that each one in the industry of Kannada cinema has to reap the benefits similar to the film ‘Yajamana’. He also thrilled the audience with a song. Nimma Aase nanage Aagne informed Vishnu keeping the people who had come from all over Karnataka in a happy mood.

As many as 300 trophies were given to those contributed for the success of the film. There was confusion chaos and utter indiscipline. Yet everyone climbed the stage.

The highlight was distributors of ‘Yajamana’ crowning Vishnuvardhan that was made out of gold. For producer Rehman the gold bangle (Khadaga) was presented. The Bombay Karnataka area Mayoor films also presented a gold watch to the producer Rehman.

On this memorable occasion Vishnuvardhan released the `Yajamana Vishnuvardhan Special’ edition brought out by B. Siddegowda, publisher of Naveen Distributors.

One has to wonder what has happened to Actor, MP Shashikumar. He was at the function of Yajmana 100 days. But here he was missing. Sashi who had done a prominent role in the film was not seen in this function!

This was also a day of all flower markets in Bangalore making heavy business. The flower markets were seen in the form of garlands at Kanteerava Indoor stadium.