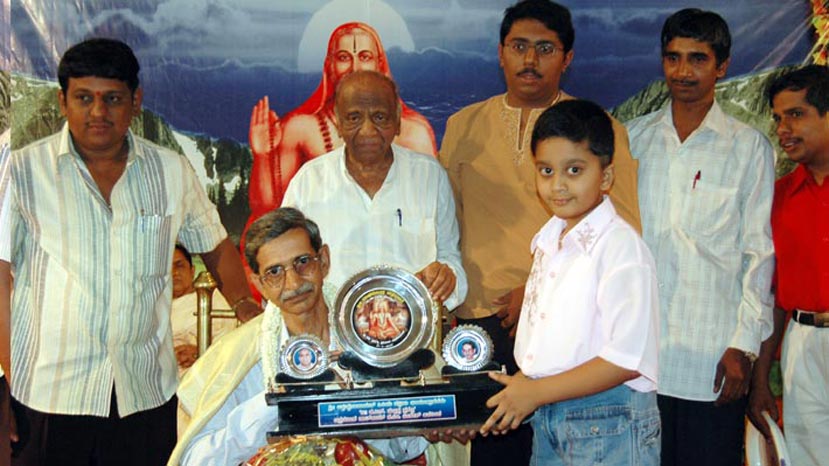 The fourth year Sri Raghavendra Chitravani award celebration was held on Saturday morning in a simple and tidy style. The maiden K.S.Mallappa (founder of Chitraloka and father of K.M.Veeresh, editor of www.chitraloka mega portal) award to senior photographer was given to Mr Narayanaswamy by K.M.Veeresh mother Nanjamanni and Master Gaurav Veeresh at an auditorium in Bangalore.

The Nirmapakarathna award to veteran producer/actor M.P.Shanker, Patrikarathna award to senior journalist and Patrika Academy Chairman V.N.Subba Rao (given by Sri Raghavendra Chitravani) Nirdheshaka Rathna award to veteran Geethapriya (given in the name of late Seshadri of Yajaman fame by Smt.Bharathi Vishnuvardhana) were given besides the awards for singer Lakshmi Manmohan (given by husband of late blind singer Vijayalakshmi) and B.Jaya (given by Smt.Jayamala Ramachandra) at the 4th year awards celebration.

WHAT THE SPEAKERS SAY ON THIS OCCASION:

Smt.Sandhya S Pai – Editor of Tharanga and Udayavani group of publications and active Television writer and head of Manipal Entertainment Network Limited called for films of social relevance in Kannada. We should see the films along with our children. That should be the quality. In Kannada we have not much of bad films compared to other language films the leading lady felt. Today’s awards celebration is very homely and I feel like that I have come to a family marriage function. In my life I have seen a film when I was 10th standard. The elders use to safeguard us like that. Only after they certify we have to watch the film she disclosed.

KCN Chandrasekhar – Mr Sudheendra occupies a respectable position and he has made all of us very small today by organizing this type of function.

T.N.Seetharam – The Kannada filmdom is in bad shape. The packaging is not happening in a good way. We have plenty of stories and a story is only the main content in a film. By making films of good quality we have to fight with other language films not by making 7 weeks bar on other languages. Anyhow today we have to introspect. Under this D.V.Sudheendra avaru aegis I would like to give an award from next year for best story writer expressed T.N.Seetharam.

Mr V.N.Subba Rao – Kannada film industry compared to other languages is in good shape. For creativity there is no cultivation going on. If we move with a proper leader our industry can reach to a good position from one year now.

M.P.Shanker – When I made a film with wild protection as the message in it the message did not reach the government. In 1857 we had 40000 tigers in 1970 it came down to 14000. Keeping this one as angle I made a film called ‘Gandhada Gudi’ it went to the deaf ears of the government. Had this film come in English or Hindi the scene would have been different. The days also have changed today. In four shots the Harishchandra song was shot. Today for one song there are more than 300 shots. Elders are not properly respected. Look at what is happening for K.S.Ashwath in Mysore.

Geethapriya – the creativity should be imbibed by a producer. People won’t ask. We have to give in proper measurement.

Lakshmi Manmohan – she expressed her humble feelings of sitting in front of elders. She sung the song Hadu Haleyadhadharenu Bhava Navanaveena……

Veteran in theatre and journalism A.S.Murthy conducted the two hours show and gave a lecture to the young film journalists.