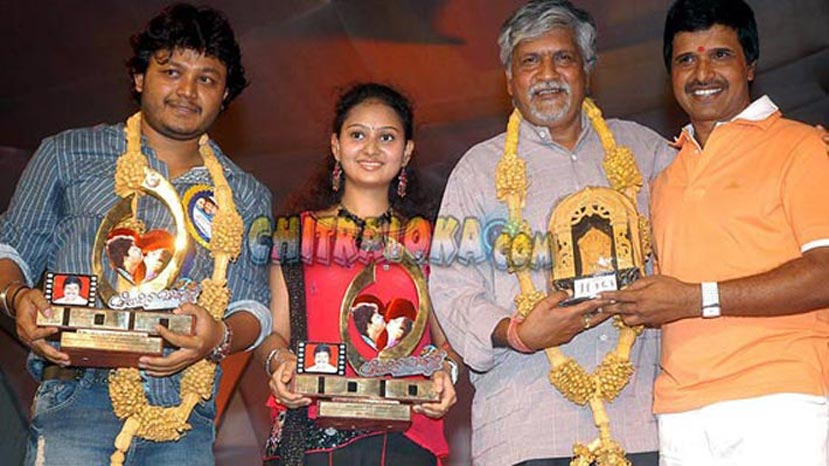 The thousands of audience who had assembled in the Gayathri House of the Palace Grounds enjoyed every moment of the centenary day celebration of this year’s biggest blockbuster hit Cheluvina Chiththaara produced and directed by S. Narayan.

It was one of the biggest celebrations of this year that saw the presence of many top stars, directors and trade representatives. The theatre owners who screened the film, distributors who obtained the rights to screen the film, artists and technicians of the film were in extremely joyous mood.

And to cap the celebrations Super Star Vishnuvardhan also made his presence to greet the team. He had special appreciation to the film's heroine Amoolya about whom he said a bright future is ahead of her. And about Ganesh he said that the actor has lot of potential to rise in the ladder. `S. Narayan is a good writer and director. He is a staunch disciplinarian who thinks only about work. He deserves this success' Dr. Vishnu declared.

Ganesh thanked S. Narayan for convincing him to accept the role, though he was reluctant in the beginning. The film's heroine Amoolya said that the victory belonged to the entire team and said she was fortunate to be selected as the heroine and thanked Narayan for guding her during the shooting. Amoolya was definitely the Cynosure of all eyes in the function. Maximum applause was reserved for Golden Star Ganesh and Amoolya.